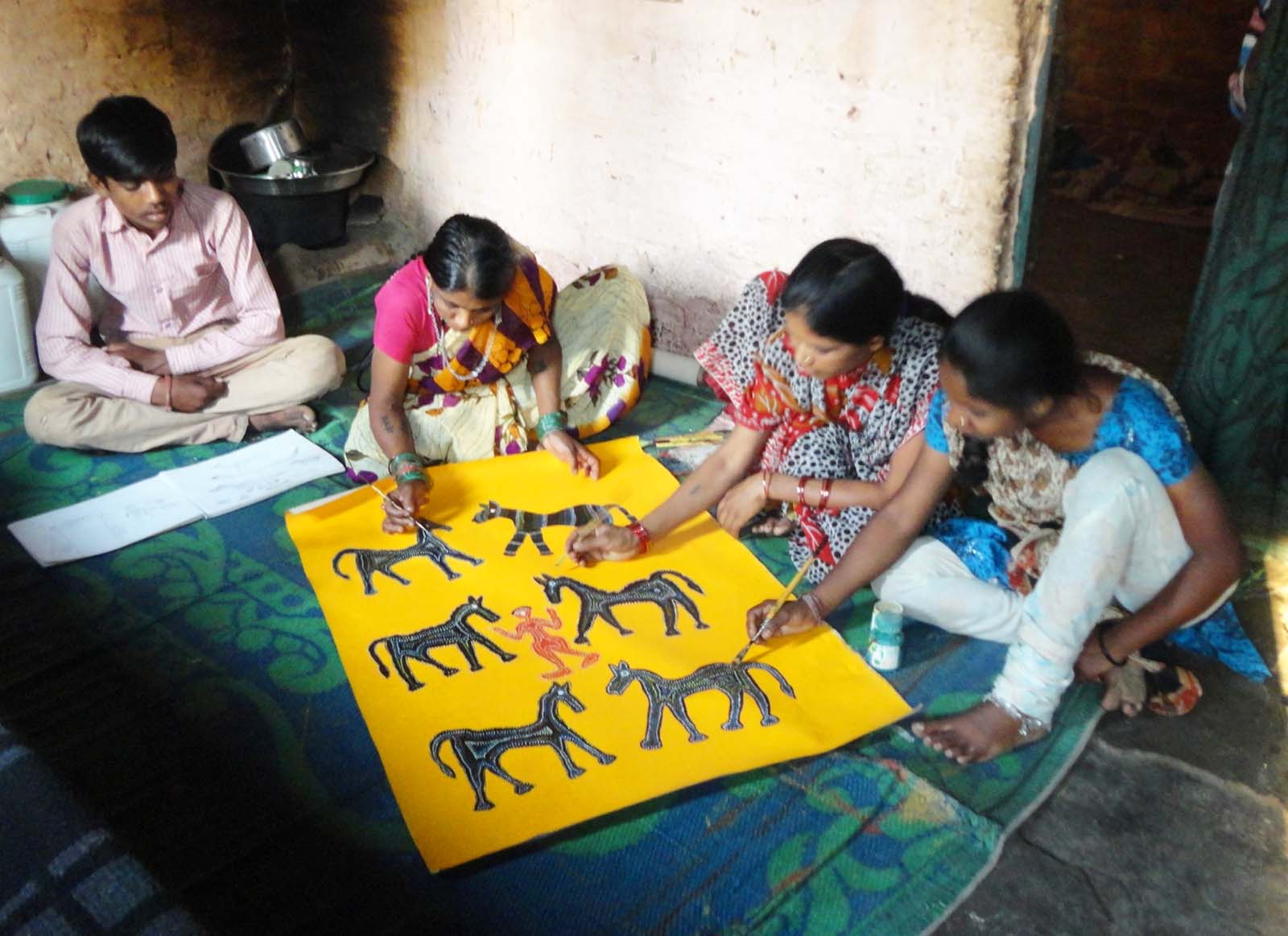 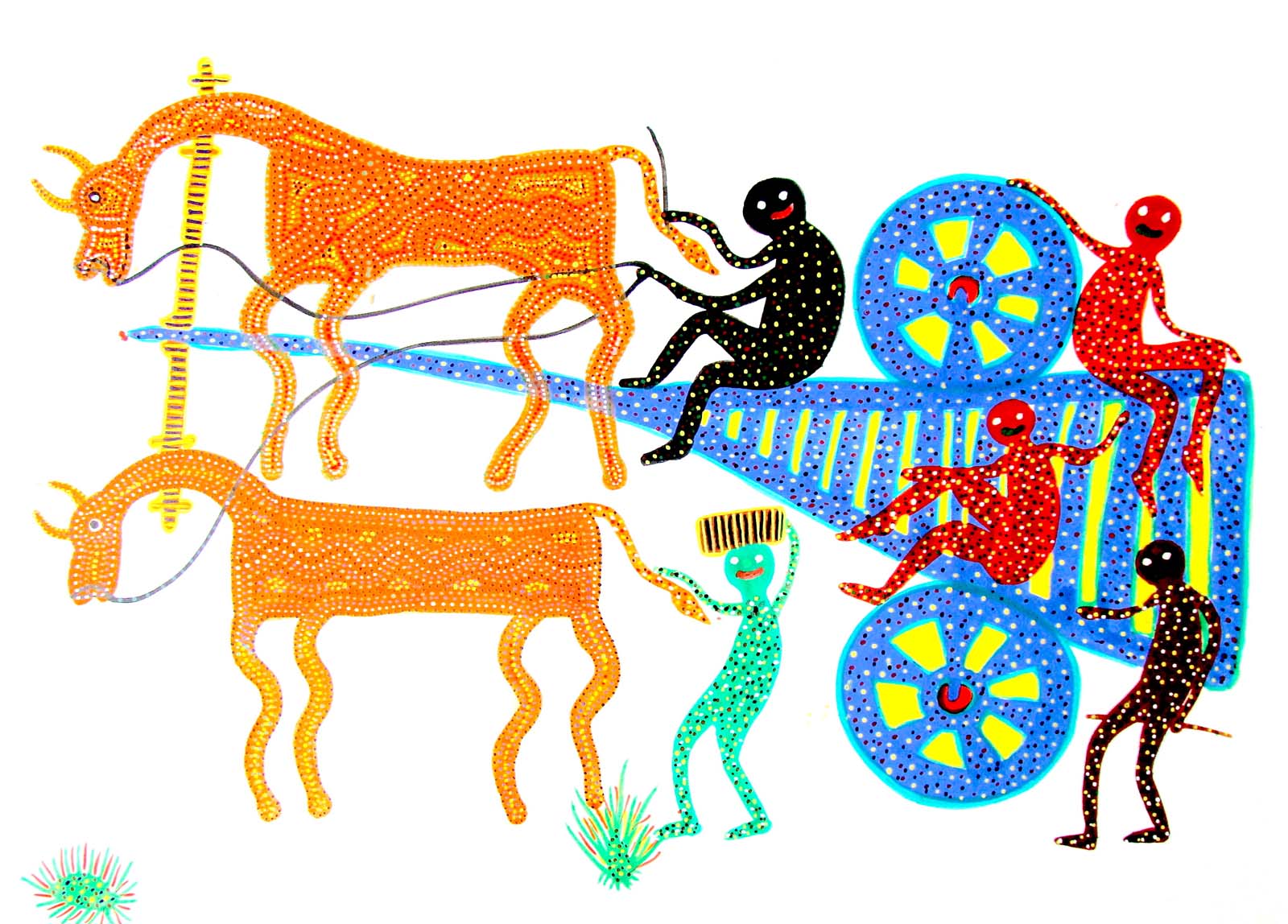 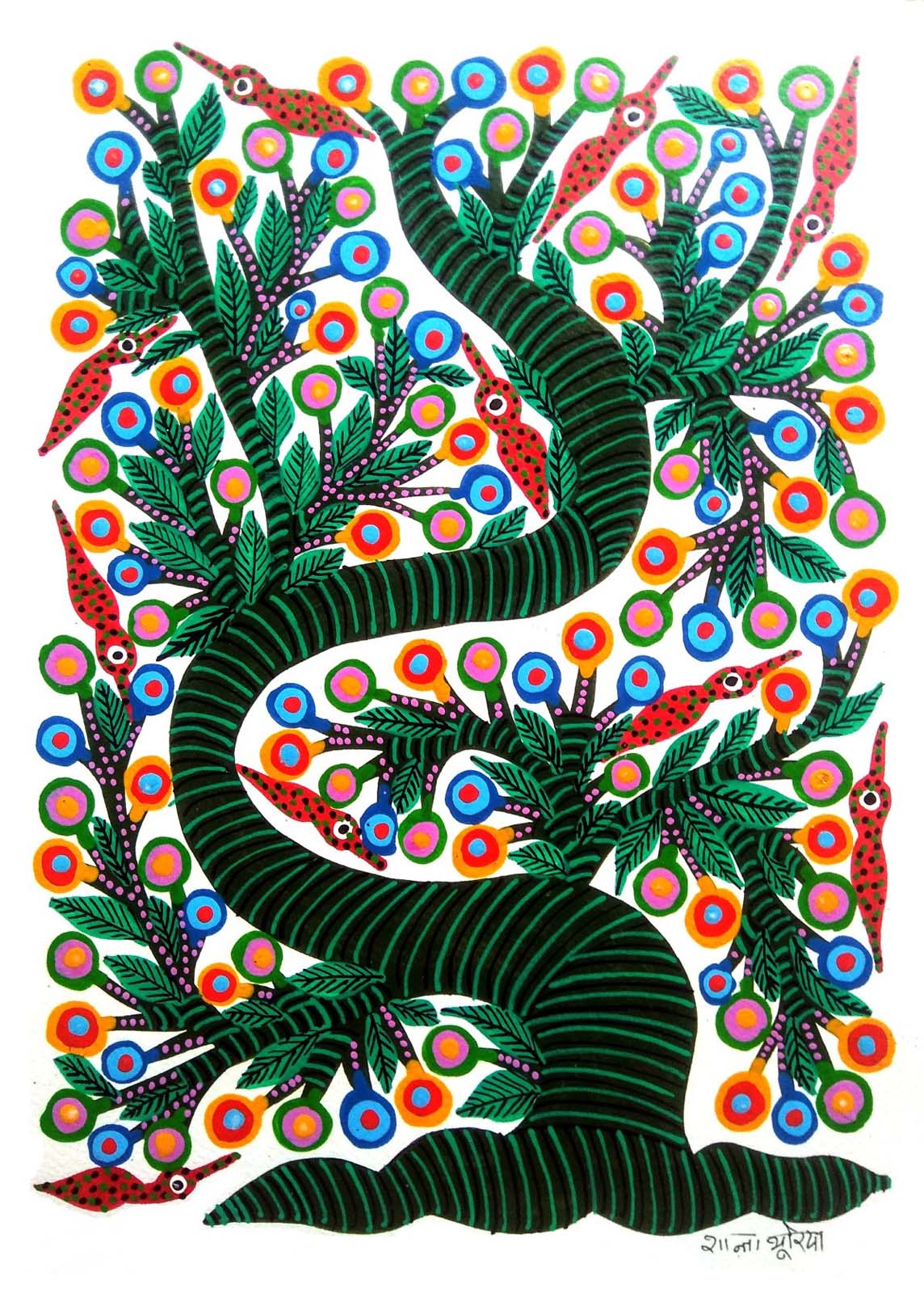 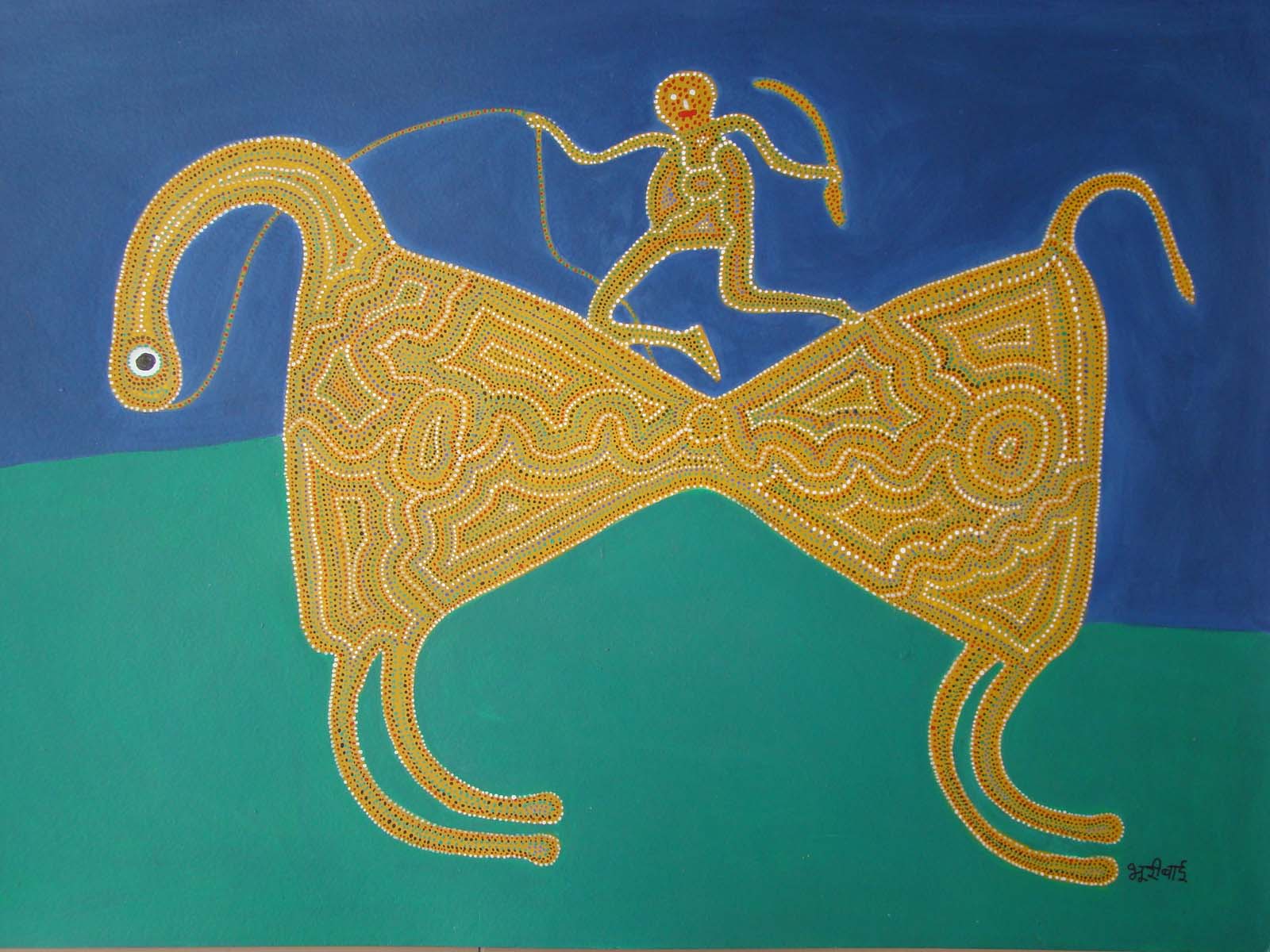 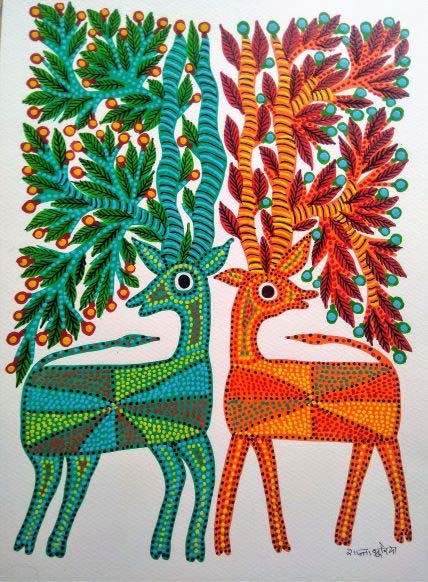 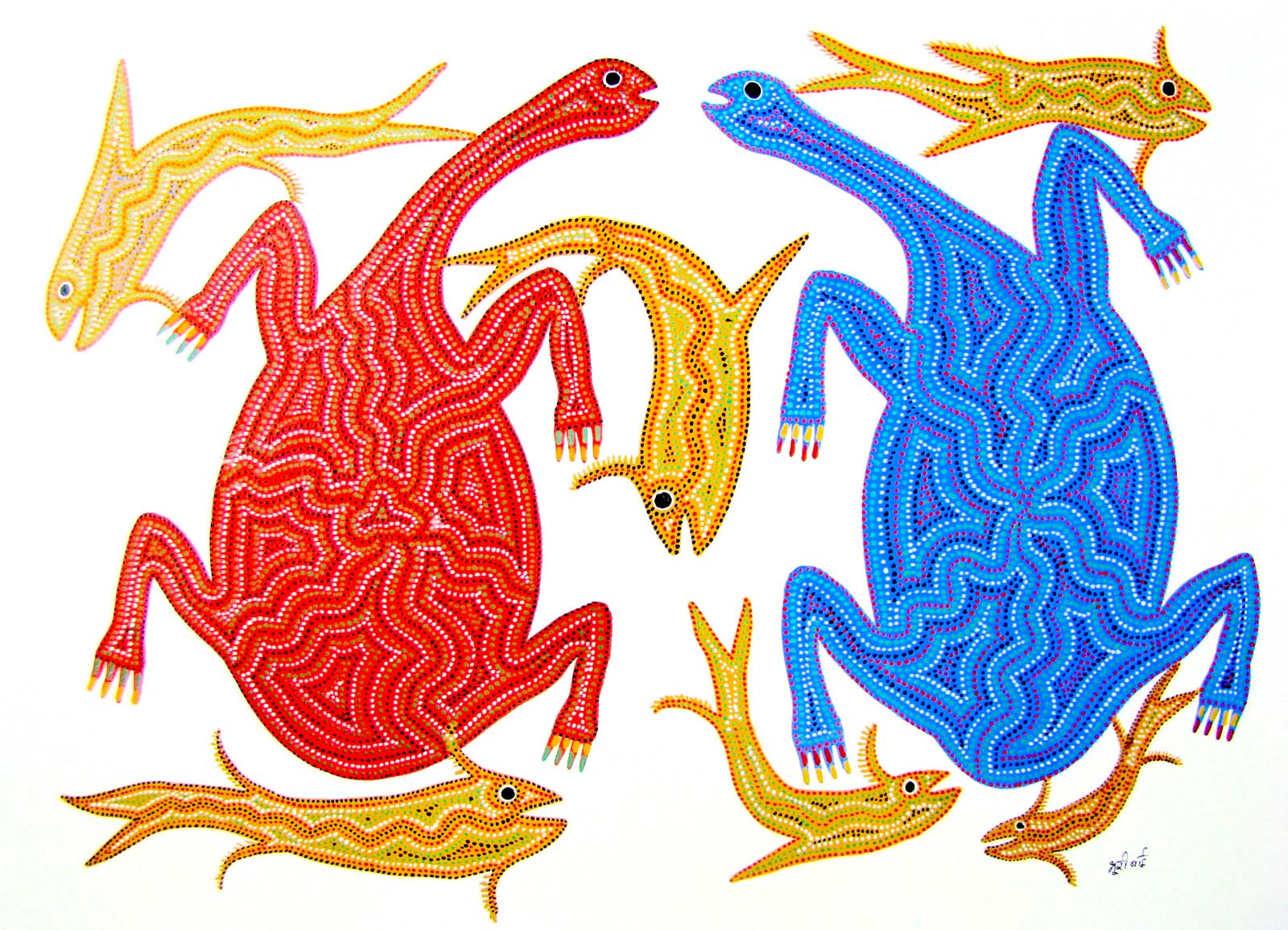 The Bhil tribe, native to western and central India, is one of India’s largest communities. Artisans from the tribe are known for Bhil art, a contemporary form of the once ritualistic art of pithora–painting on walls with clay pigments. These paintings originated thousands of years ago, adorning the walls of caves, before being adopted for use in homes and now, on paper and canvas. Originally, the paintings depicted horses,symbolic representations of gods, goddesses, and ancestors of the Rathva/Bhil, but now include designs such as trees, buildings, people, and other animals. The paintings hold a deep social relevance, usually centered on the fulfillment of a wish. Similar to the artwork of Australian aborigines, Bhil paintings are larger tableaus created by painting a series of small dots.

Originally, women were prohibited from making pithora paintings, but in the 1980’s the director of Bhopal art center Bharat Bhavan, asked women he had seen creating graffiti on walls to paint on paper and canvas. Inspired by Bhil painting, these women, Bhuribai and Ladobai, are now renowned for their paintings and the simple act of using a paintbrush to make marks on paper has brought this traditional art form back to life.

Bhuribai is a recipient of a number of awards including the 2009 “Shikhar Samman” award from the Indian government for the promotion of art, culture, and language. Her daughter, Shanta Bariya, is also an accomplished painter whose work has afforded her a steady income–earning more than her husband, she notes–allowing her to purchase a house and educate her daughters. Ladobai, who originally came to Bhopal as a construction worker, now works with the Tribal museum of Bhopal and has won awards for her art from the Ojas Arts and Prafulla Dahanukar foundations. “We three are the top women artists of the Bhil clan and we can say that our work is of the best quality.”