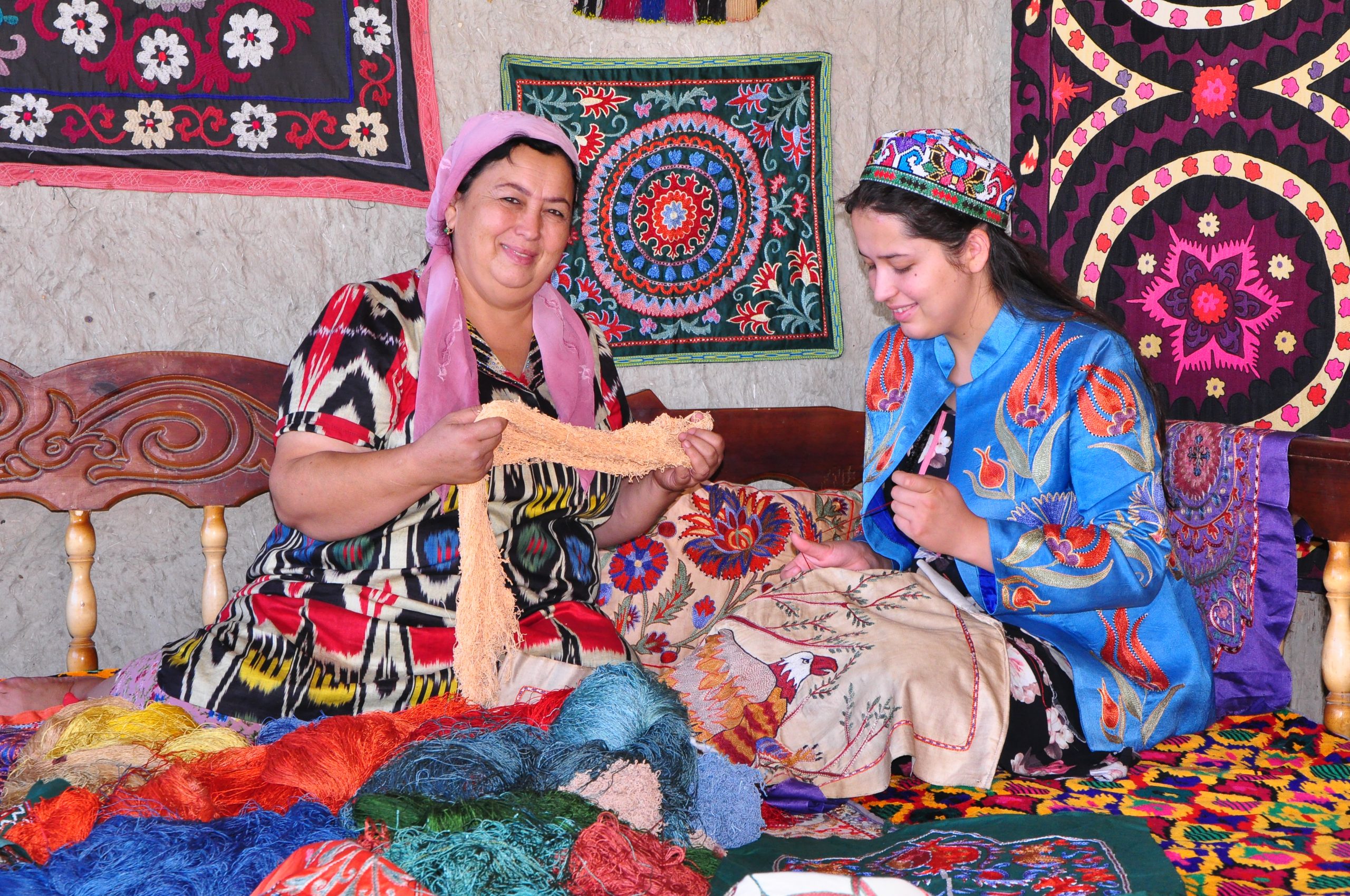 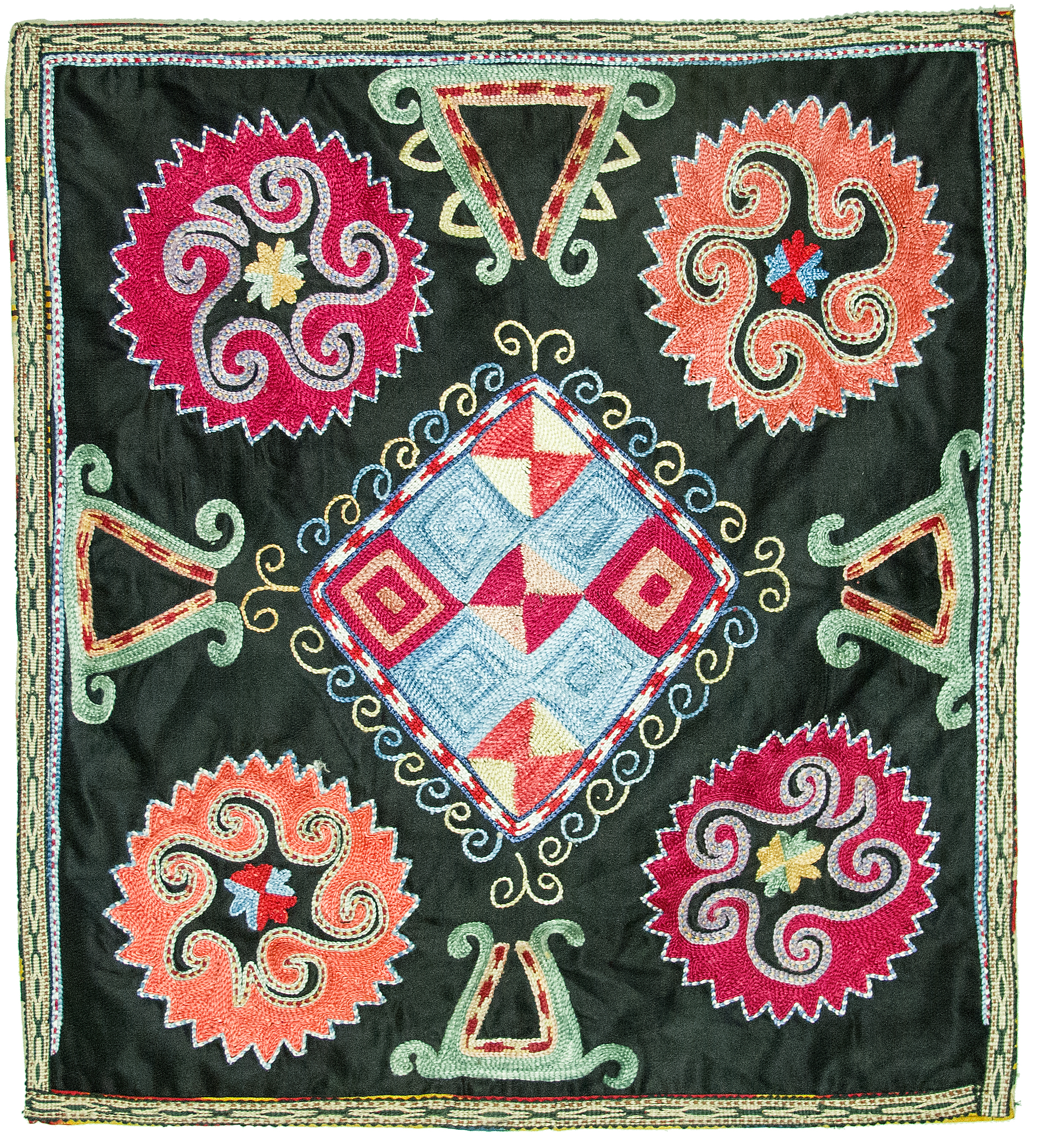 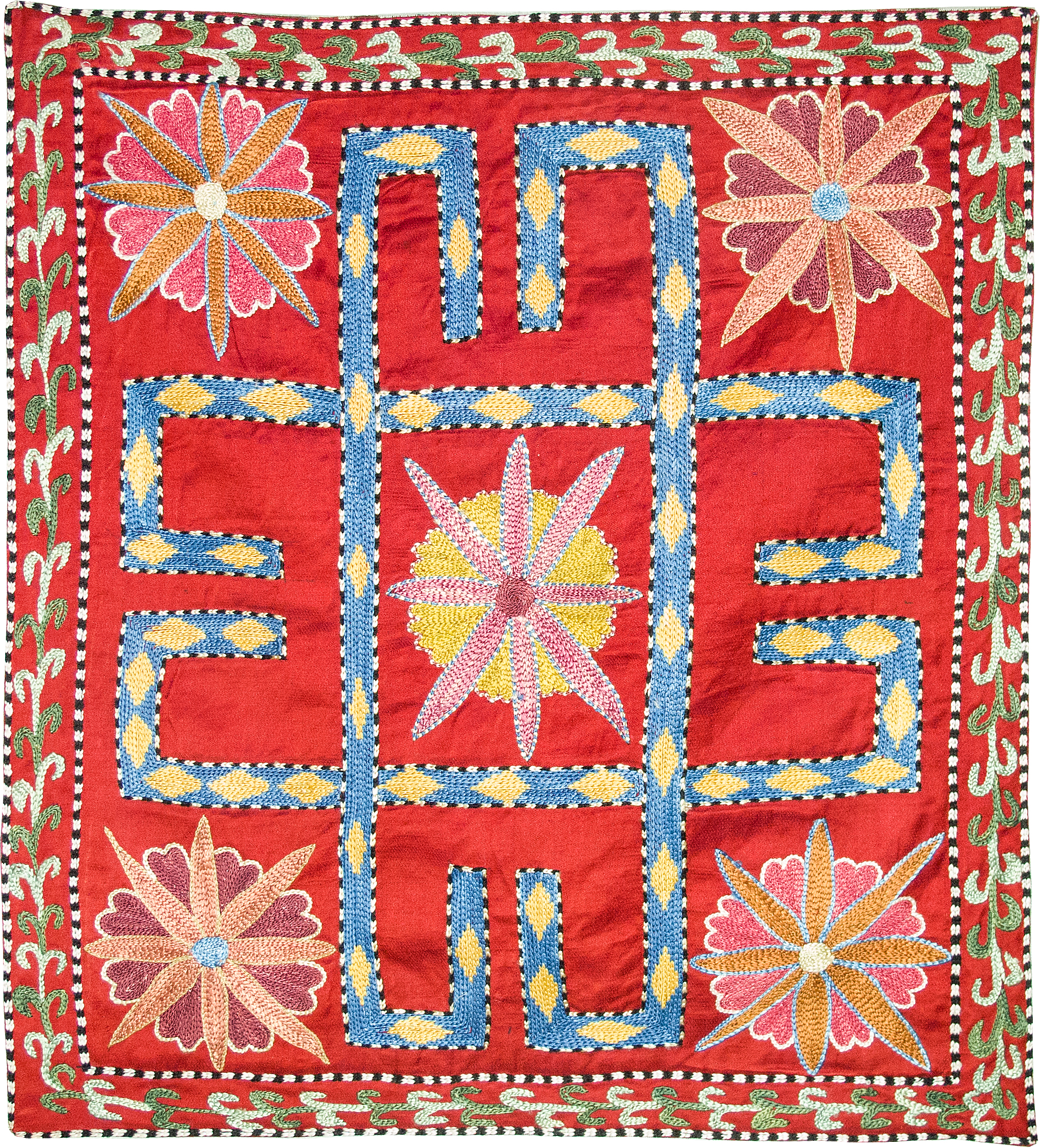 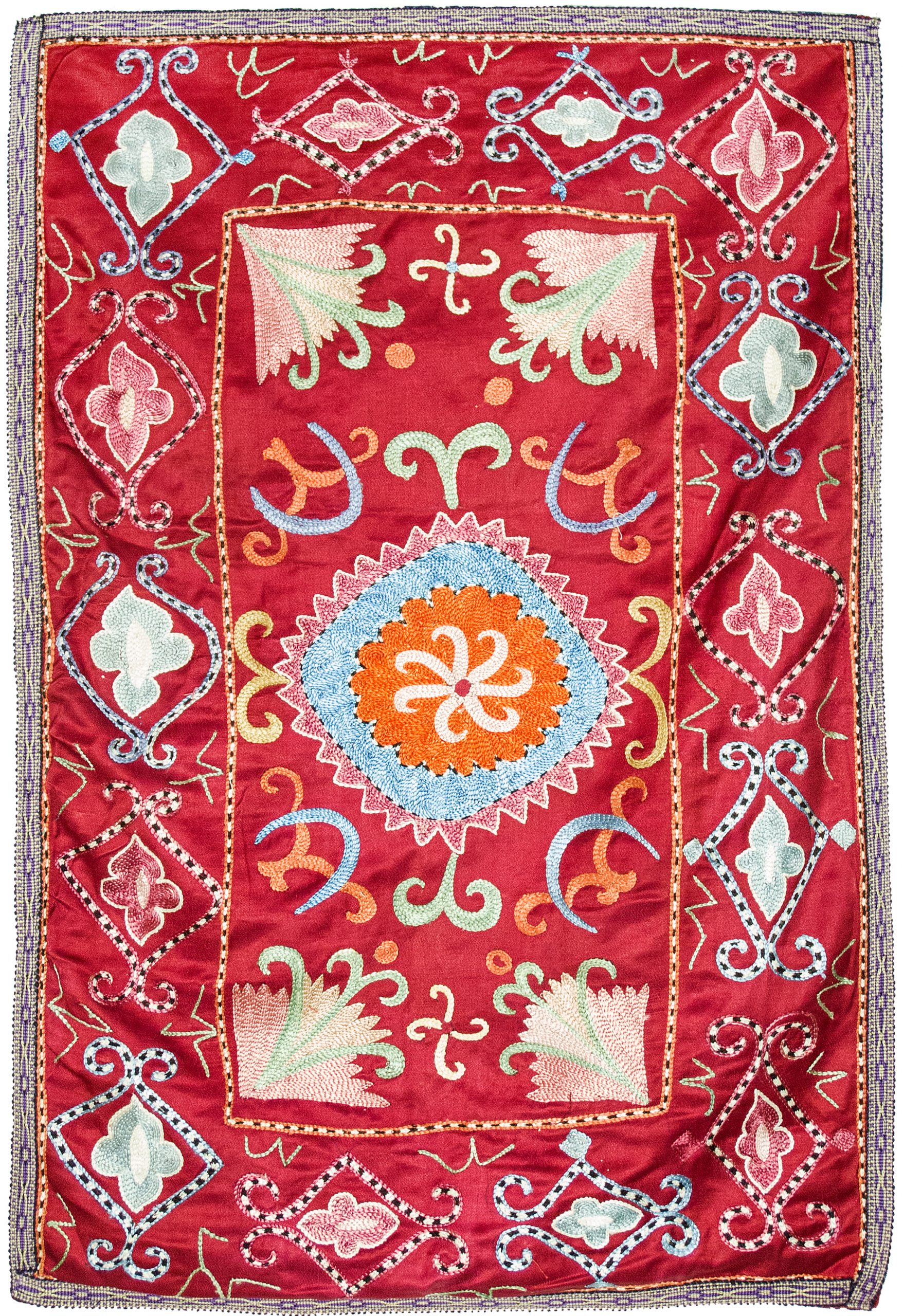 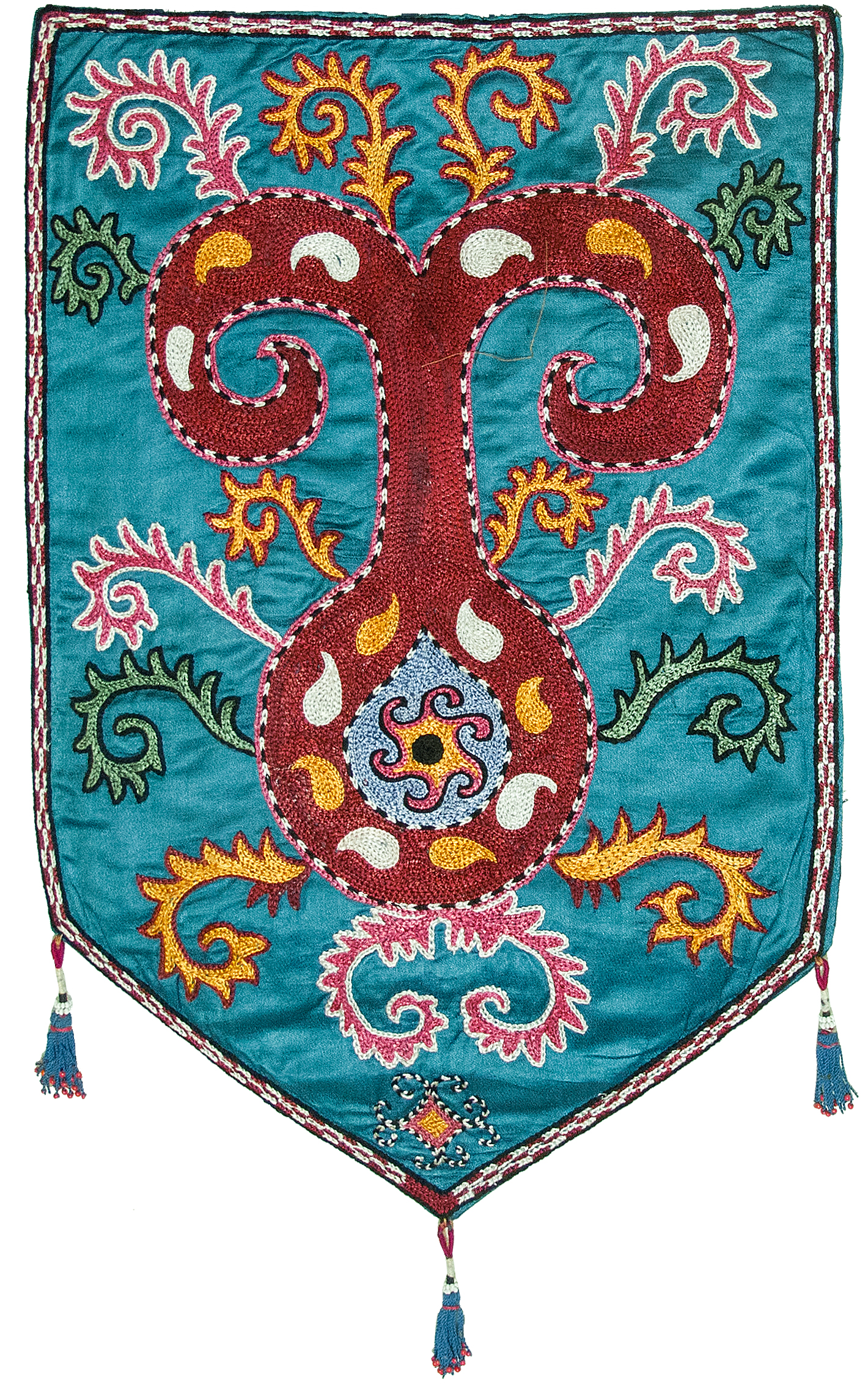 The semi-nomadic Lakai tribe once inhabited Central Asia in the territory of the Bukhara Khanate, an area that crossed parts of Uzbekistan, Tajikistan, and Afghanistan. Over time and through various political machinations, the Lakai almost disappeared by assimilating with modern nations. While some people in Central Asia still identify as Lakai, little is known about their ancient history and culture. What is remembered and revered are their unique embroidery designs which are celebrated and perpetuated by contemporary artisans like Mukhabbat Kuchkorova of Shafirkan in southern Uzbekistan.

Mukhabbat’s interest in Lakai textiles developed after seeing them in museums. She was taken by their bold shapes and vibrant colors. “I always try to follow the Lakai ideas,” says Mukhabbat who recreates their designs on pillow shams and wall hangings embroidered with silk thread. “I respect their beliefs, and would like to share with other people the deep meaning of Lakai patterns.” Common motifs include stars, “onions” with divergent horn-shaped swirls, flowers, and leaves. Today, interpretation of Lakai symbology is largely speculative and based on educated extrapolations, but it is believed that their designs were derived from shamanistic mythologies and ritual practices, particularly those of women, as they were the ones who practiced embroidery.

According to Mukhabbat, “Embroidered items made in the territory of Central Asia are widely used in daily life and for special occasions, but when we talk about the Lakai embroidered items—they are different. Besides their utilitarian function, they performed cult-related functions, [and] from the point of view of many people in Central Asia, the Lakai’s symbols [are holy, strong, and still popular today]. The Lakai tribe lives among us, not in the distant past. Currently, the culture of our state is being revived and we are trying to learn our past more thoroughly. This is a challenge not only for artisans but for all educated people.”