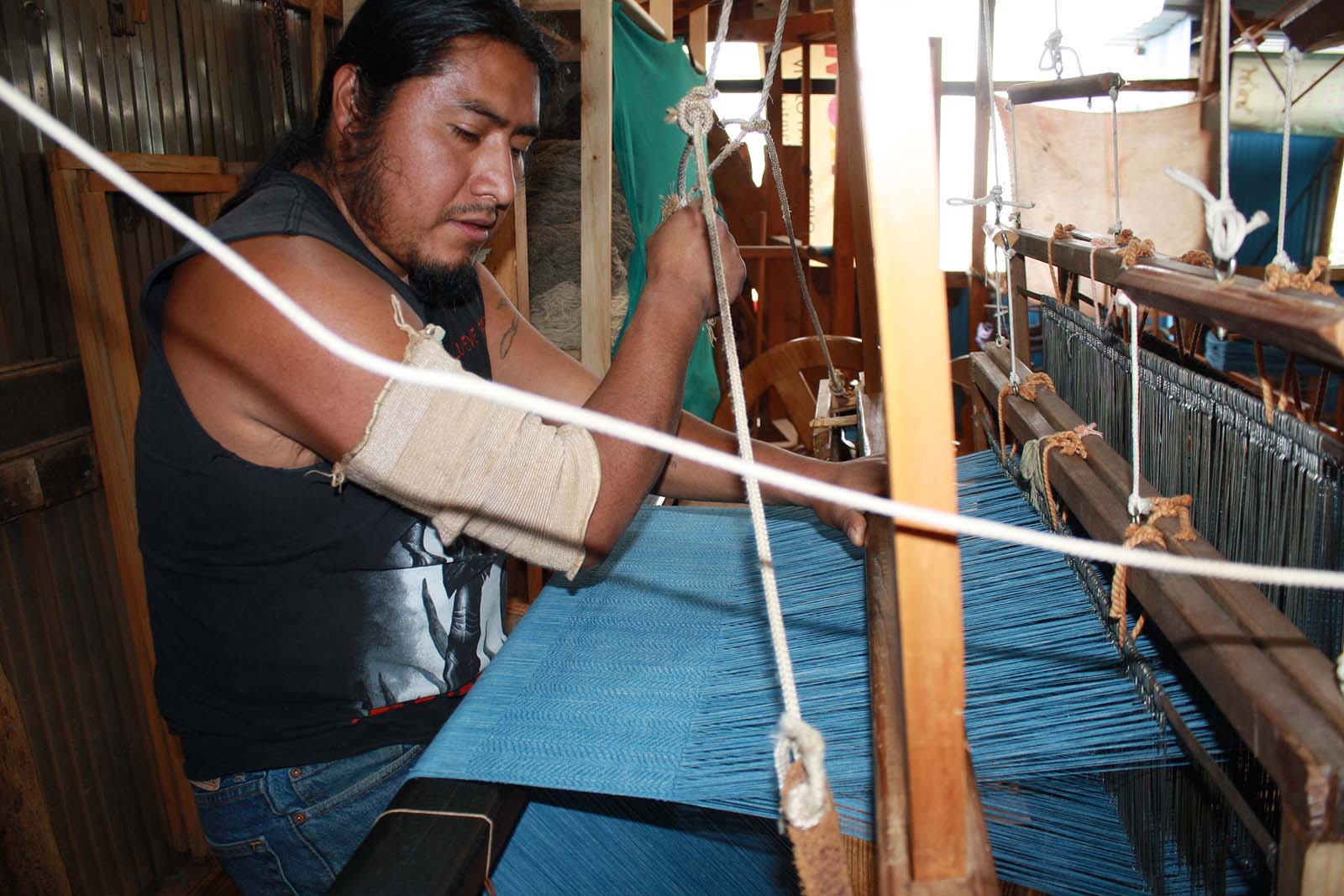 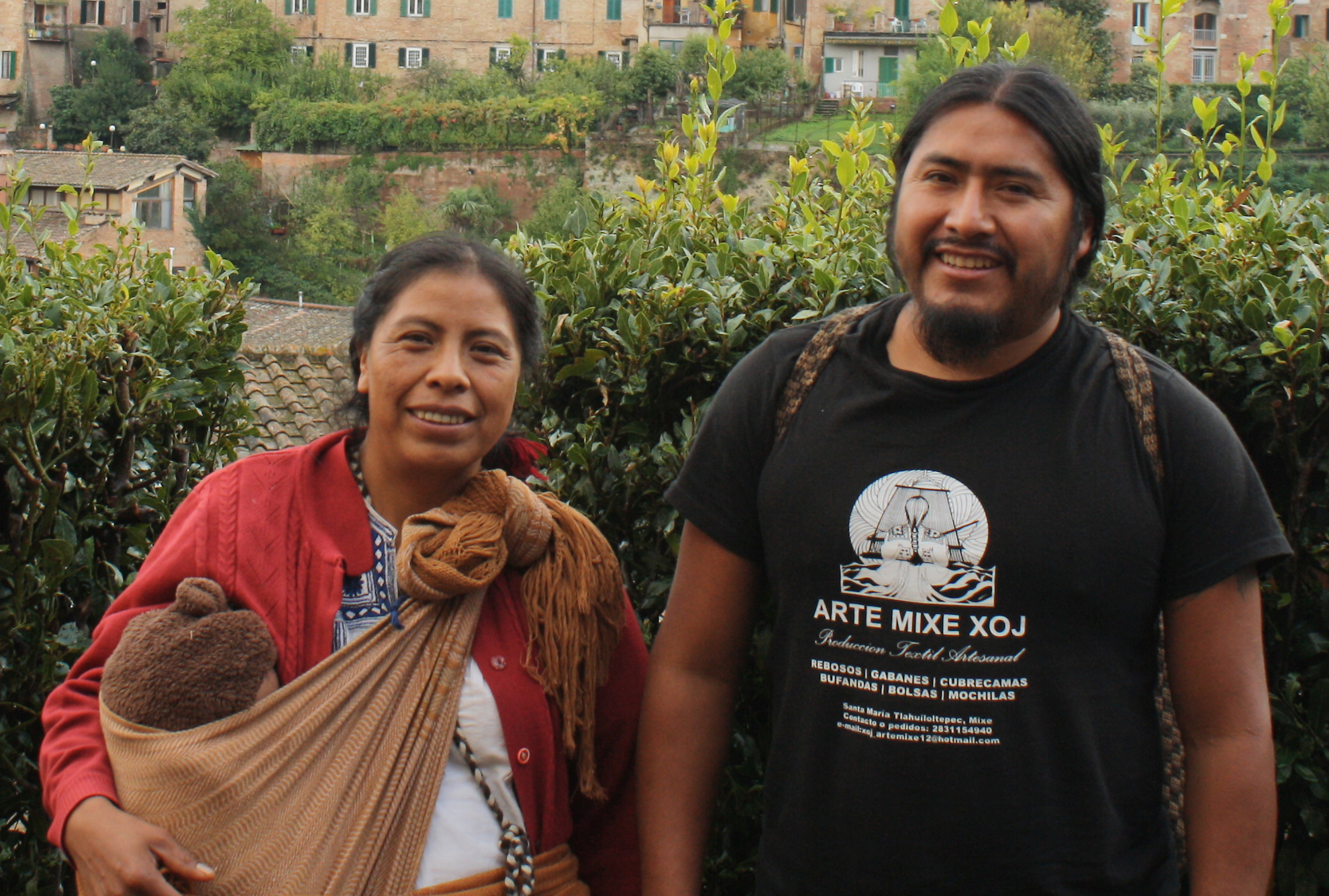 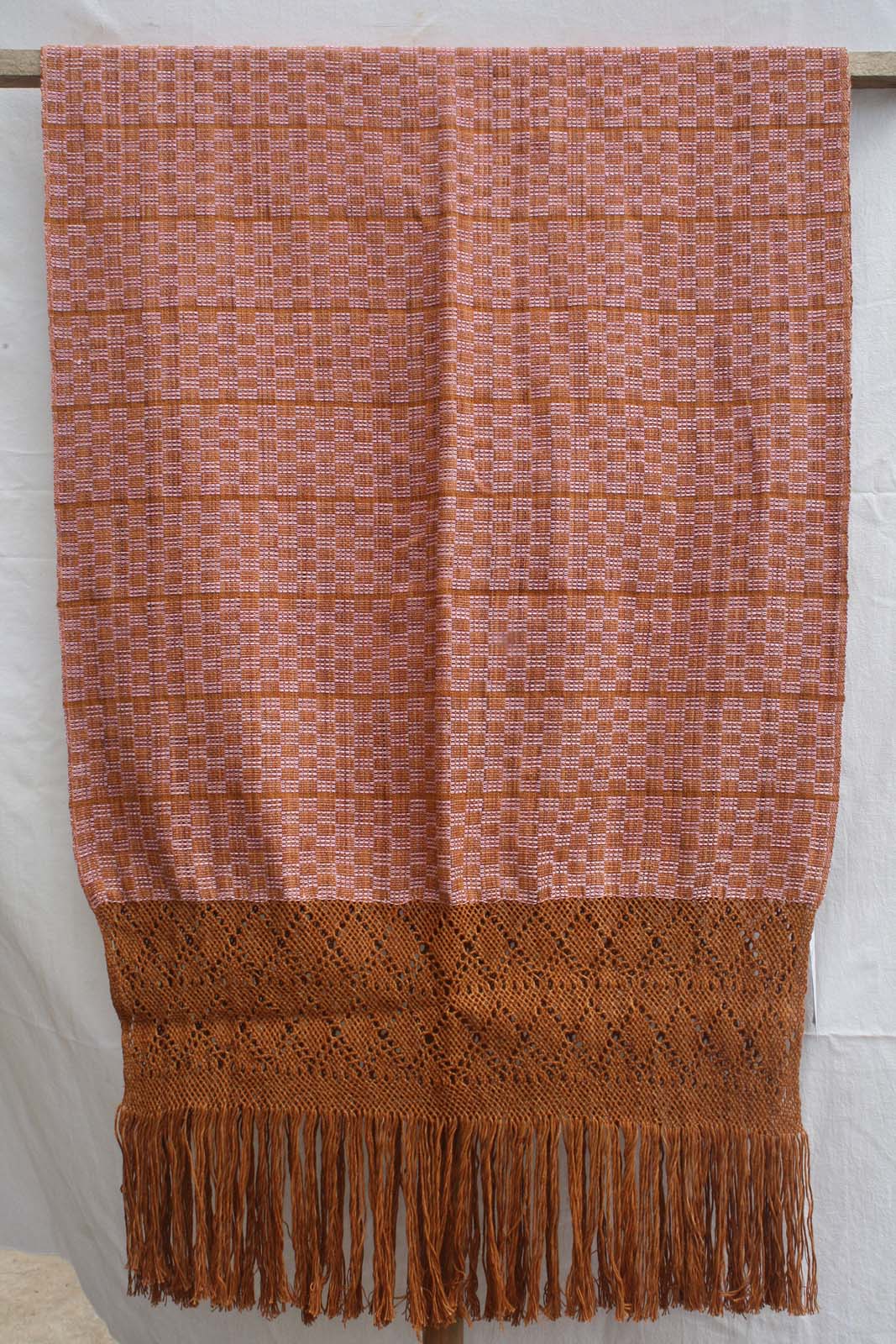 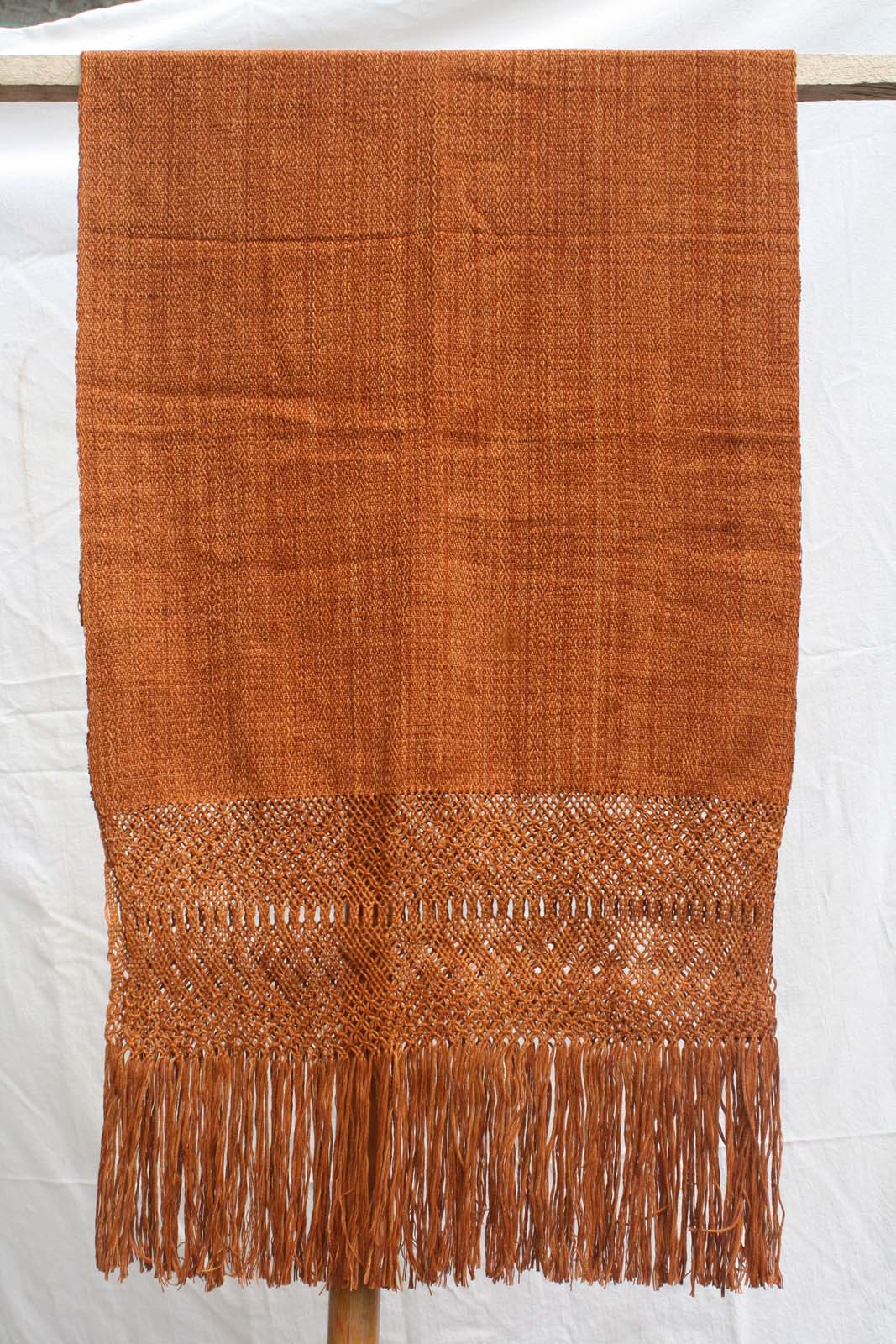 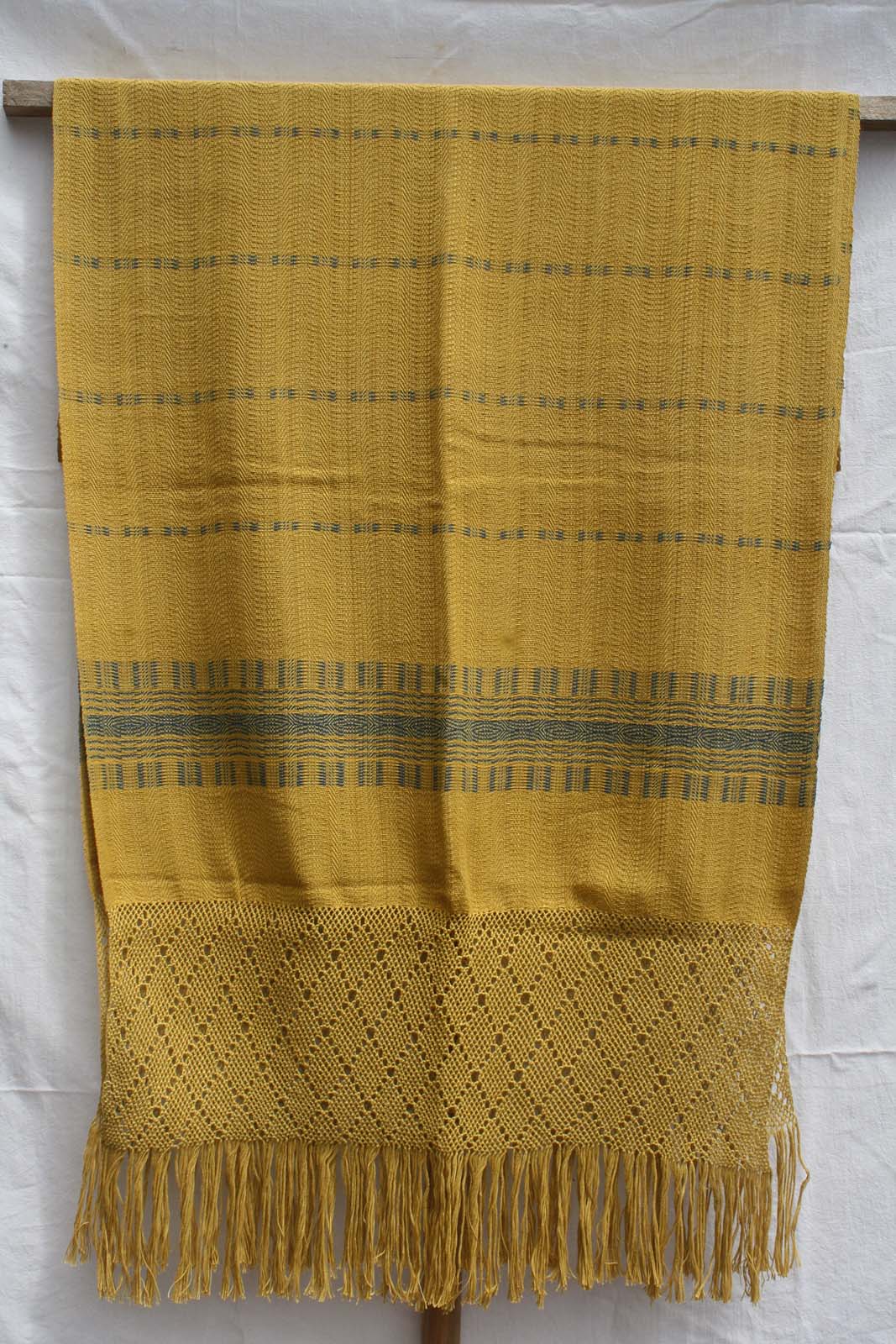 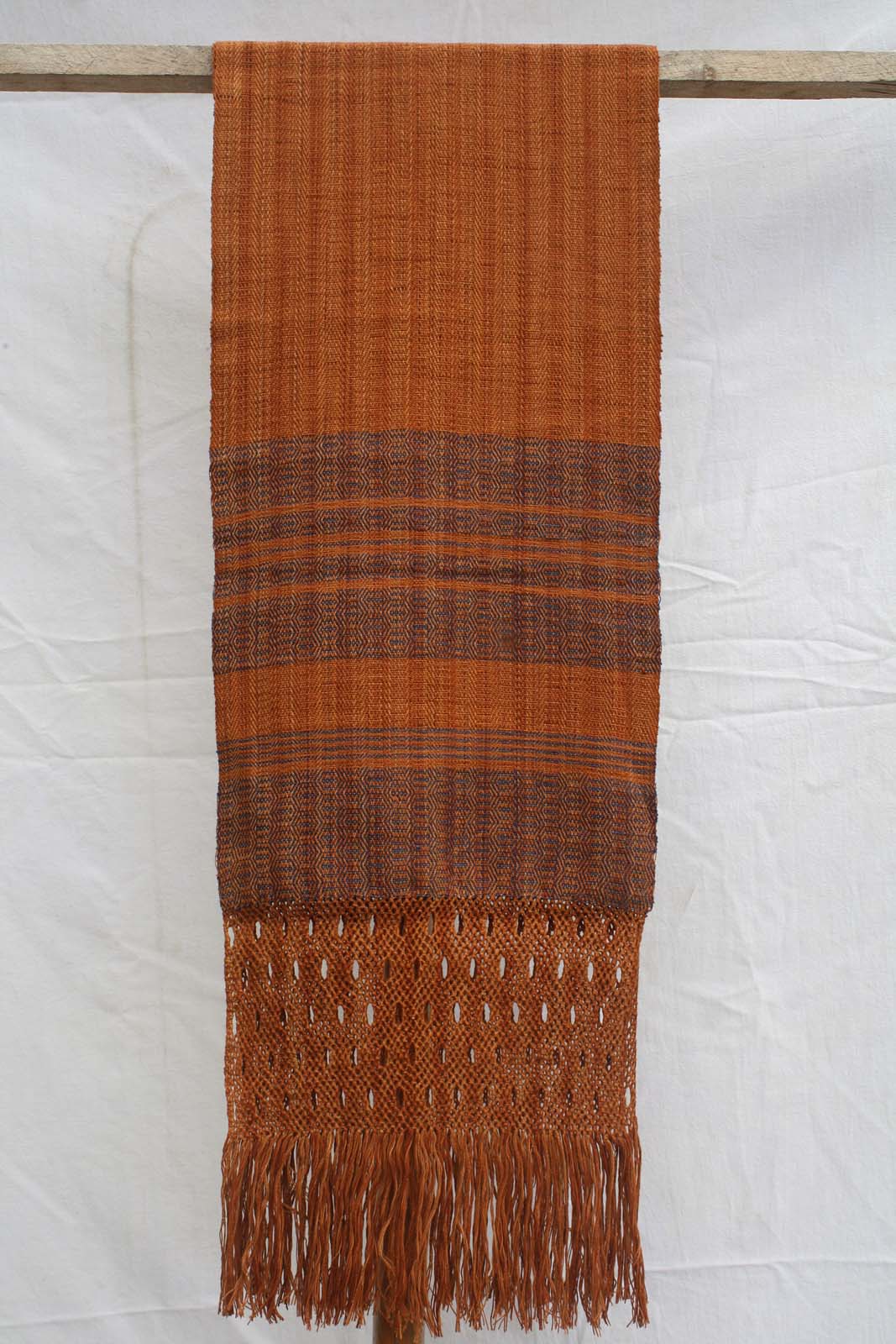 Bonifacio Vásquez Pacheco and Aurelia Gómez Jiménez live in Tlahuitoltepec, a small, isolated town in the Mixe region of the mountains of Oaxaca. Traditional dress, especially the use of shawls, is common with woolen shawls being worn daily to protect against cold or hot weather. Finer cotton shawls are worn for special events such as parties, weddings, baptisms, and Patron Saint Days. Bonifacio began learning to weave when he was eight years old, taught by his maternal grandmother. Aurelia’s maternal grandmother was also a weaver and taught her the craft along with the art of making intricate fringes.

Originally, the traditional shawls of Tlahuitoltepec were woven on a back-strap loom, which has since been replaced by a pedal loom, using cotton and natural dyes. Bonifacio and Aurelia purchase cotton and indigo in Oaxaca City. Other natural dyes for their shawls are procured from members of their community. The cotton is dyed in their home workshop, where Bonifacio designs the shawls and scarves and Aurelia designs their fringes. Bonifacio and Aurelia employ several community members in the weaving process who assist with dyeing, weaving, and making the fringes for the shawls. Their young daughter is included in the process, assisting as she learns the craft herself.

In addition to providing a good quality of life for their family, weaving has allowed Bonifacio and Aurelia to contribute to their community by employing marginalized people, such as single mothers and adults with disabilities, and teaching the craft to interested young people. In 2016, Bonifacio and Aurelia were chosen by the Mexican Government to represent Mexican weaving traditions in a traveling exhibition in Italy and Spain. Bonifacio has also been recognized with awards at the Eighth Oaxaca State Folk Art Exhibition in 2008 and the FONART National Contest in 2015.